The Weddings in the Bible 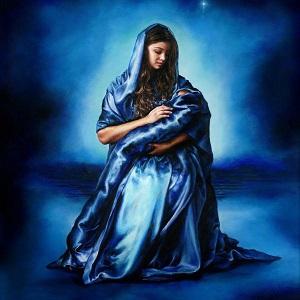 Three days later there was a wedding at Cana in Galilee.

Jesus' mother was there, and Jesus was also invited to the wedding feast with his disciples.

When there was no wine, Jesus' mother said to him, They have no more wine.

Jesus answered her, Woman, what is there between me and you?

My time has not yet come.

His mother said to the servants, do what he tells you.

Now there were six stone vessels there, intended for the purification of the Jews, and each containing two or three measures.

Jesus said to them, Fill these vessels with water. And they filled them to the brim.

Draw some now, he told them, and bring some to the meal planner. And they brought it to him.

When the organizer of the meal tasted the water turned into wine,

Not knowing where this wine came from, while the servants, who had drawn the water, knew it well, He called the bridegroom and said to him:

every man serves good wine first, then the worse after getting drunk; you, you've kept the good wine until now.

This was the first of Jesus' miracles at Cana in Galilee.

He manifested his glory, and his disciples believed in him. 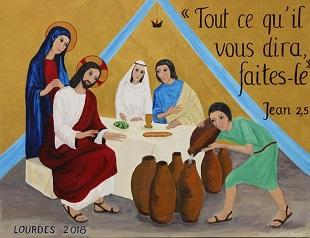 My darling daughter, my Heart is overflowing with love.

I feel the need to explain to you why my Son Jesus and I wanted to be present at this wedding.

You would think we went there just to show up.

No, my daughter, deep mysteries were about to unfold there.

I will reveal to you: how my motherly love was revealed there,

And how my Son gave there tangible signs of his fatherhood and his kingship for creatures.

My Son had returned from the desert and was about to begin his public life.

He wanted to be present at this wedding first and that is why he was invited.

It wasn't just to celebrate with others,

But to accomplish great things there for human generations.

He took the place of Father and King of families, and I, that of Mother and Queen.

Through our presence, we would renew the holiness, beauty and order of human marriage.

This marriage is constituted by God in the Garden of Eden

At the time that Adam and Eve were married by the Supreme Being for the purpose of populating the earth.

Marriage is the substance by which the life of generations flows.

We can say that he is the trunk by which the earth is populated.

Priests and religious are branches

But, without the trunk, the branches cannot exist.

By their sin, by withdrawing from the Divine Will,

Adam and Eve caused the family to lose their holiness, beauty, and order.

And I, your Mother, the new and innocent Eve, with my Son Jesus,

we were going to bring to order what God had done in Eden.

I obtained the grace That the Divine Will may reign again in human couples:

I thus became Queen of Families.

Our love was consuming us. We wanted to let the creatures know how much we love them.

We wanted to give them a sublime teaching. Here's how :

In the middle of the meal, the wine ran out; filled with love, my maternal Heart wanted to help the newlyweds.

Knowing that my Son could accomplish anything, And sure that he would listen to me, I said to him:

"My Son, the spouses have no more wine. "

He replied: "My hour to perform miracles has not yet come"

I was sure he wouldn't say no to his Mom's request.

And I said to those who served:

My daughter, with these few words, I gave creatures a most useful and sublime lesson ...

With my mother's heart, I said to them: my children, do you want to become saints?

Do the Will of my Son.

Do not stray from what He tells you and you will obtain His likeness, His holiness and His power.

Do you want all your ailments to end? Do whatever my Son tells you.

Do you want to obtain a grace, even a difficult one? Do what he tells you and what he wants.

Do you want to get what is necessary for natural life? Do what my Son tells you.

What He says to you and desires contains such power that it creates the desired graces in your souls.

How many souls see themselves filled with passions, weak, afflicted and miserable! They pray and pray ...

But, because they don't do what my Son asks, they get nothing. The heavens seem closed to them.

This is a great suffering for your Mother, for I see that while these souls are praying,

they move away from the source in which all goods reside: the Will of my Son.

The servants did exactly as my Son told them, namely:

"Fill the jars with water and place them on the table. "

My dear Jesus blessed this water which immediately turned into delicious wine.

May those who do what Jesus says and desires be blessed a thousandfold!

By this miracle, my Son granted me a very great honor:

He made me Queen of Miracles.

And this is why he wanted my participation and my prayer for the accomplishment of his first miracle.

He loved me so much that he wanted to make me Queen of Miracles.

He did it in the facts and not just in the words. He says :

“If you want graces and miracles, come to my Mother. I never deny her anything that she asks of me. "

By my participation in this marriage, I thought of the centuries to come

and I saw the Reign of the Divine Will over all the earth.

I also interceded so that the Most Holy Trinity reign fully in families.

With my rights as Mother and Queen,

I was keen to make available to creatures the necessary graces, help and holiness,

So that they can live in the Holy Kingdom of the Divine Will.

This is why I keep repeating over and over again: "Do whatever my Son tells you. "